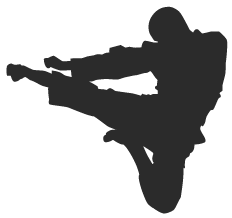 The USTF uses a “continuous sparring” system rather than a “point-stop” system. It is called continuous because the competitors do not stop after a point is scored, but rather they fight continuously (for 2 minutes) much like a boxing match. Benefits to this type of sparring are a more realistic execution of techniques, strategy, follow through, and the ability for a fighter to score by either attacking or counter attacking. In addition to this, fighters have the capability to score multiple points continuously and with combinations of techniques.

A point is scored when a legal technique makes contact with a legal target area. The technique must be executed with proper control and balance. A point will not be scored if “warning” or “minus point” infractions (described below) are associated with the technique.

Note:  Techniques executed while in the air (as described below) score an additional point versus the same from a standing position.
See the point system outline below.  These will also appear on the score sheets for judges.

The point system is outlined as follows:

NOTICE FOR GUP-LEVEL SPARRING:  We have decided that in the interest of safety for gup-level competitors that there will be ﻿NO face contact for colored belt sparring﻿ irregardless of age, size, or rank.  Normally, the USTF permits face contact for everyone, but we have opted to minimize potential injury with gup level students.

Legal Targets -- Face (Black Belts only), top, sides, and back of head, chest and rib cage, abdominal area.
Note: For a while, the USTF had removed the back of the head as a target, but has returned it to legal target status.

Illegal Targets -- Spine, kidneys, back of neck, side of neck, throat, knees, all other joints, groin, buttocks, any and all other areas below the belt.


"WARNINGS" AND "MINUS POINTS"

These infraction penalties can occur for a variety of reasons that the Center Referees have been trained to identify.  However, for purposes of this article, we will cover the basics of what each type of penalty is and how it might be incurred.

Foul -- If a fighter uses an illegal technique, illegal target, or otherwise violates rules with an infraction, the Center Referee can break the fighters up and announce either a "warning" or a "minus point" for the infraction.

Note: The Center Referee may disqualify a fighter for any foul if he/she feels the foul was malicious and/or intentional, or because of the result of the foul.  A disqualified fighter will not receive any award for their match.

Warnings (minor fouls) -- When this occurs, the Center Referee will warn the fighter and instruct the Scorekeeper to mark a "warning" on the score sheet.  Three (3) warnings equals a "Minus Point".  Special note: spitting out your mouthpiece to stall, avoid penalties, avoid being scored on, and other creative uses will be rewarded with a "warning".

Disqualification -- This can occur either by getting three major-foul minus points, or by other actions as determined by the Center Referee.  Some examples (but not an entire list) are: major disrespect or unsportsman-like conduct; any knockout; contact resulting in blood being drawn due to a foul (defined as an "uncontrollable flow" of blood); malicious or intentional harm to an opponent; or if a fighter is not available when their match is called (after allowing a reasonable period of time to pass).  A fighter can also be disqualified if they are injured through no fault of their opponent and cannot resume the match.
Return to Sparring page            Go to Sparring Gear page